The QR Code app is now available for live bus timetables and delays in Malaga.

The Malaga Metropolitan Transport Consortium (CTMAM) will install QR codes at 739 stops along the main operator’s lines in the Malaga region, allowing passengers to check the time until the next service with an update live on arrival.

To do this, simply install a QR code reader app on any smartphone (Android or iPhone) and point the camera at it.

Stops where waiting time can be checked in real time with the new QR code service will be identifiable by the following image attached to the bus stop: 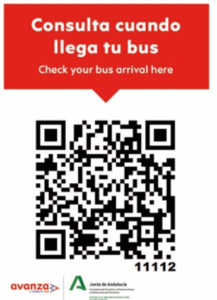 The QR code already works on lines M-110 Málaga-Torremolinos-Benalmádena Costa and M-160 Málaga-Rincón de la Victoria, and will be gradually extended to include all 49 lines.

According to CTMAM Director General Javier Berlanga, this is an improvement in the quality of the Consortium’s service as it will allow citizens to know precisely when the buses will leave their current stop.

The service will be extended along the following lines:

– From June 21, the M-260 Málaga-Vélez Málaga (via Torre de Benagalbón) will be closed.

The timetables are available on the CTMAM website (https: // ctmam)

As reported by Axarquía More

Alhama in Granada in Spain “shaken” by ...