The Philippines, officially the Republic of the Philippines, is an archipelago, or chain of over 7,000 islands, in Southeast Asia between the South China Sea and the Pacific Ocean.

the evolution of philippine currency is linked to the course of the country through the years of colonization. Jhe name Philippines comes from Philip II, who was King of Spain during the Spanish colonization of the islands in the 16th century.

The Philippine peso is derived from the Spanish peso, an ancient silver coin from Spain and Spanish America equal to eight reales. These Spanish pesos were brought in large quantities from Spanish America by the Manila galleons (Spanish trading vessels) from the 16th to the 19th century. These ships were the only means of communication between Spain and its Philippine colony.

The Spaniards ruled the Philippines for 333 years and finally left the country in 1898 after the Spanish-American War. For the next 48 years it was under the United States.

The country’s independence was delayed by World War II and invading Japanese troops from 1942 to 1945 until Japan’s surrender at the end of the war. The Americans recognized the independence of the Philippines in 1946.

Anyway, English and Filipino are the official languages ​​of the country. And the Philippines is the third largest English-speaking country in the world.

Currency of the Philippines

1 Peso is subdivided into 100 Centavos, or “Sentimos” in Filipino.

The central bank of the Philippines is the Bangko Sentral ng Pilipinas (BSP), which is responsible for issuing coins and notes for circulation in the Philippines. Coins and banknotes are mainly produced in the BSP Security Factory Complex (SPC).

the Philippine banknotes and coins have undergone many changes over the years.

Current banknotes of different denominations do not vary in size, but each has distinct and striking colors of purple, orange, red, green, yellow, and light blue.

The latest creations include images of politicians, soldiers and other famous people from the Philippines, as well as endemic wildlife and the country’s iconic natural wonders.

Color is an important part of the design, accenting key elements such as denomination digits, seals and banknote edges.

As for the coins, they usually display face value with national heroes and the BSP logo on the front and the BSP seal on the reverse.

The latest, called the Next Generation Coin Series (NGC), includes the 10 Piso, 5-Piso, 1-Piso, 25-Sentimo, 5-Sentimo and the 1-Sentimo represents the national heroes, the BSP logo and endemic flora in accordance with the design of the NGC banknote series.

Recently launched Philippine coins and banknotes come with enhanced security features such as the latest anti-counterfeiting technology and are designed to better meet the needs of the elderly and visually impaired such as the inclusion of large intaglio printed numerals Front. of each denomination.

A Brief History of Philippine Currency

Philippine Currency History follows an interesting timeline – from the pre-Hispanic era to the Republic of the Philippines we know today.

The means of exchanging goods and services in the pre-Hispanic era of the Philippines with countries like China, Thailand, Java and other neighboring countries was through the barter system.

As the barter system was very inconvenient, “Piloncitos” made of small gold coins were introduced as the first form of the local currency system.

With the Spanish occupation from 1521, they introduced coins to the Philippines as a medium of exchange. The country adopted the first paper money in the form of Pesos Fuertes issued by the country’s first bank, El Banco Espanol Filipino de Isabel II, during the Spanish era.

The declaration of independence in 1898 led to a brief revolutionary period where the first local currency was introduced. However, the revolutionary currency was out of circulation and was declared illegal soon after the Americans arrived in 1901.

A new currency was formed pegged to the price of gold and was at the time worth half the price of a US dollar until the country became independent in 1946.

The Japanese invasion of the Philippines during World War II also played a role in the history of Philippine coinage. Two types of banknotes in large denominations were issued, which Filipinos called “Mickey Mouse Money” due to hyperinflation. This made the Japanese-Philippine pesos worthless.

The USD/PHP exchange rate from 1946 to 1962 was 2/USD. The currency devalued considerably under the indexation system. In 1986, it was trading at 20/USD. Black market exchange rates for currency during these periods were always higher than the official rates, where the regularly traded at 3:1.

After the new Central Bank Act of 1993, the Philippine peso became a floating currency. This brought stability to the currency, even though the exchange rate was much higher than previous levels. And black market rates finally disappeared.

In the early 1990s, the peso depreciated to 28/USD. In October 2004, 1 USD was equal to 56.341, the most depreciated value of the currency in the history of USD-PHP exchange rate pairing.

There are many ways to send money to the philippines the United States. However, the cheapest way to send money is done through online money transfer service providers such as Xoom, Wise and Remitly.

Compare the best money transfer service providers side by side and choose the option that suits your needs.

What is the US dollar worth in the Philippines?

Since the exchange rate is floating, depending on the supply and demand of the currency market, the value of the number of dollars against the Philippine peso will fluctuate from day to day and from minute to minute.

To subscribe to exchange rate alerts on CompareRemit to get the latest updates.

Tips for sending money to the Philippines

There are many factors affecting the exchange rate. The mid-market rate or interbank rate is the actual exchange rate and the ones you see on Google. You can get the latest PHP USD online. Use an online currency converter to get an idea of ​​what your money is worth and get the best rate when you want to send money to the Philippines.

Most money transfer companies and banks offer a premium exchange rate which can be between 3% and 5% of the actual rate. Premium rates are often hidden costs that reduce the amount of money your recipient is supposed to get on the other end.

If you are sending money from the United States to the Philippines, the weakness of PHP against the USD is in your favor because your recipient receives more pesos for your dollars after conversion.

According to BSP, Overseas Filipino Workers (OFW) sent home $31.418 billion in 2021, up 5.1% from $29.903 billion in 2020. The United States was the largest contributor, accounting for 40% of total remittances in 2021, followed by Singapore, Saudi Arabia, Japan, United Kingdom, United Arab Emirates, Canada, Taiwan, Qatar and South Korea. Remittances from these countries accounted for 78.9% of cash remittances.

Know your transfer fees before you send

Choose a money transfer specialist who displays fees upfront before you hit send. You don’t want to be surprised in the end when you see that they cut some of your money in fees without your knowledge. This can happen when intermediaries are involved in the transfer process. This mainly happens when you use your banks for international transfers.

Most money transfer specialists have price estimators on their websites to check how much you could pay before sending your money. Or simply compare their money transfer offers at CompareRemit Website or App available for both iOS and Android. 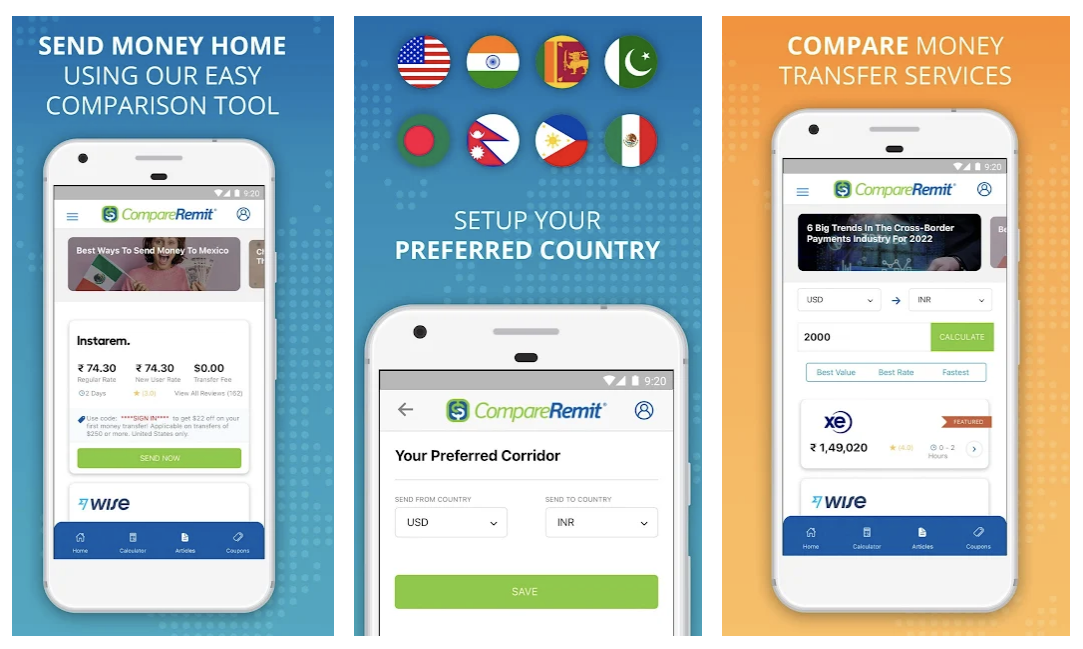 The rates offered by money transfer companies vary widely. Some even offer the mid-market rate, while others may offer premium rates that can be competitive. Some may lock in your advantageous rate for a certain period of time so that fluctuating rates do not affect your transfer.

There are also exchanges. Higher transfer fees may allow you to receive your money faster, while lower fees may take longer. You will need to choose the ones that suit your transfer needs. So compare your options is highly recommended.

Use discount codes and coupons to save money

Money transfer companies usually waive transfer fees for your first transfer. Take advantage of such an offer to reduce your transfer costs. And from time to time, they offer discounts and coupons that help you save more money.

Tips for avoiding transfer fees when sending money to the Philippines.

If you want to send money to the Philippines, there are lots of cheap optionsbut first, compare them and choose the one that best suits your situation.

Are the days of the US dollar as the world’s reserve currency numbered?

Wednesday, April 20, 2022 12:44 PM The US dollar has been the world’s reserve currency for over 100 years, but how long will it be before a new unit of exchange replaces it? It can be said that payment platforms have upgraded their infrastructure to be able to process transactions using digital currencies. Will the […]